The highest state you have ever experienced is simply the result of how open you were. If you don’t close…This can go on all the time–unending inspiration, unending love, and unending openness. That is the natural state of a healthy heart.

Something challenging happened to my friend this weekend. “It just brought up so much old stuff,” he told me. Had I remembered what I read in The Untethered Soul’s Chapter 6 called The Secrets of the Spiritual Heart, I would have said, “Sounds like it triggered your Samskara.” If you recall, Chapter 5 began our examination of energy flow. I challenged us all to begin considering those moments in our day when we become closed to the natural energy flow. Have you noticed your moments? HOW ENERGY GETS BLOCKED In Chapter 6, Singer goes into a little more depth about what it means to say that energy gets “blocked,” a nice little buzz term that gets used a lot but isn’t necessarily defined carefully. Singer offers clarification on this with relatable everyday illustrations, as usual. Let me try to summarize… The ideal state would be to have your chakra system, especially your heart chakra, completely open. Openness is when input comes in from your senses based on what you are experiencing and you neither reject nor cling to the subsequent energy created by that experience. The energy of anger might come, but then it goes. The energy of fear might come, but then it goes. The energy of joy might come, but then it goes. Imagine your spiritual heart is a valve for all of these various energies and all is moving through smoothly, without a hitch. 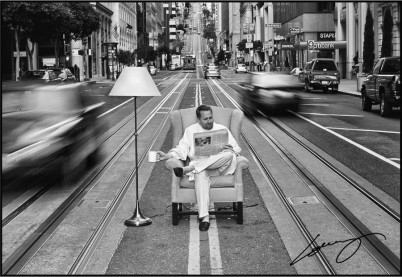 Unless you are Jesus or the Buddha, good luck alwaysremaining this open. You probably do have many open moments though, especially if you practice mindfulness in one form or another. But for most of us, our perceptions, judgements, and interpretations chime in during many of our experiences. Then, instead of sensations simply passing through the valve of our spiritual heart, something else happens:

Our mind begins to go on a scavenger hunt through all the possible meanings of something we’ve just witnessed. And after we fixate on something like this, which most of us do here and there throughout the day, we are no longer experiencing every car and tree that is passing after that light blue Ford. Sure you have to notice the next stop light, but doesn’t your mind just chug chug chug away with thought after thought about that car, your girlfriend, and what could have been going on? You’re not just trying to calmly consider…you’re letting anxiety and fear and suspicion get a hold of you. Ta-da!… That energy gets stuck. And when enough energy gets stuck, think about what happens to that valve of your spiritual heart. It begins to get crusty. Okay, Singer didn’t say “crusty,” he said that these accumulations of stuck energies “encrust the valve of the spiritual heart.” Thus, energy flow is restricted and we get the idea of the energy center (i.e., chakra being “blocked.” SAMSKARAS Singer now introduces the term Samskara and includes these various descriptions of what a Samskara is: a blockage, an impression from the past, an unfinished energy pattern that ends up running your life, a cycle of stored past energy patterns in a state of relative equilibrium, a little packet of cycling energy literally stored in your energetic heart center. Samskara means an energy that won’t stop cycling and cycling because you won’t let it. You keep it there and affirm it. In fact, you have a bunch of these little orbiting energy packets–your Samskaras. These blockages can stay with you a long long time. This should come as no surprise since sometimes difficult experiences from decades ago can still “come up” with a look or a word from a stranger. You probably know exactly what I mean. My friend has some Samskaras that he has not released and so they became easily aggravated by the situation in which he found himself this weekend.

A Busy Mind by Ghostgirl-Shanika

Singer says that this pattern of energy blocking is where depression, darkness, negativity can begin. There is too little energy coming in or out in relation to that Samskara. It doesn’t mean that you are not open at other times and related to other experiences.  A light blue Ford might set you off for years to come because of the fear of infidelity that it arouses; but perhaps in most other situations you are able to be open and in the moment. By the way, there are also Samskaras that develop from clinging too tightly to certain expereinces. These would be impressions that you have retained because of the great sense of joy associated with them. Sometimes we don’t want that good feeling to ever end. But just like fear and anger, we can allow joy and exuberance to pass through as well. Learning to Stay Open You can probably imagine that in order to stop this process of blocking and clinging there is going to be an intentional change required. And what is it? Singer recommends that when your light blue Ford drives by, notice the pain, smile, relax, step back into your seat of witness and observe the pain as it just flows through you. Maybe all you’ve tried so far is clinging or pushing. Maybe all you’ve done so far is allowing your heart to get blocked. Time to try something new, isn’t it?

It only hurts for a minute and then it’s over. …Learn to be centered enough to just watch this stuff come up. Once you sit deeply enough inside to stop fighting the stored energy patterns, they’ll come up constantly and pass right through you. Just like the physical body purges bacteria and other foreign matter, the natural flow of your energy will purge the stored patterns from your heart.

So here is the question for the week. And this time I don’t have to make it up for us…it is right there at the bottom of page 57:

Do you want to try to change the world so it doesn’t disturb your Samskaras, or are you willing to go through this process of purification?

So begin. Anticipate the freedom and ease that will come into your life as you release this energy. And stay tuned for our summary of Chapter 7 which gives us even more direction on how to transform our tendencies to close. Here’s to your open heart, ~~~S Wave~~~

where I promise not to clog your timeline.

4 thoughts on “The Untethered Soul, Chapter 6”

Energy We Bring
A Lush Garden

From an overgrown meadow to urban sanctuary. Design to completion, and all the hard work in between. Follow our adventures and updates.

“We are the cosmos made conscious and life is the means by which the universe understands itself.”

The Practice of Living Awareness
NamaStacy

Holla for my Mala

Hang Your Hopes From Trees

I'm not where I started out.

More than a travel blog. So much more.

Here There and Everywhere

"Embracing our vulnerabilities in order to bring light to the world"